Stories Behind Big Investment of the Strong Exhibition

Stories Behind Big Investment of the Strong Exhibition

After the ten years of growth from 2011 to 2020, AWE (the Chinese Electrical Appliances and Consumer Electronics Expo) turns into one of the global top three exhibitions of its kind. As other exhibitions reveals signs of waning, AWE’s momentum is expected to continue. Being a strong brand presence, AWE never stops throwing money into product and brand advertising, but to invent more to keep up with the rising impetus. 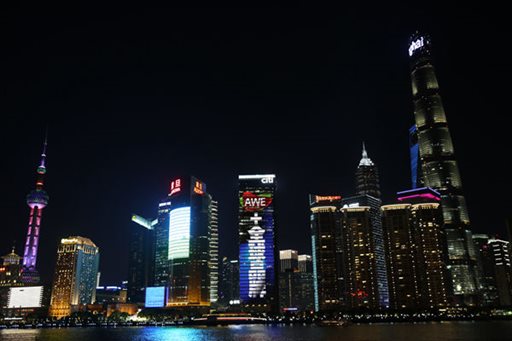 On the eve of AWE2019 in March this year, Wechat moments were exploded with the news that three characters occupy the billboard on Huangpu River—AWE! That is the high-end quality advertisement on the curtain-wall billboard conducted by AWE, which has lasted for one week, a rare scene to be seen in the exhibition circle.In particular, on the first night of AWE2019, AWE combined with the world’s important exhibitors to dominate the screen for two hours in the golden period. The rotating broadcasting of advertisements has shocked the whole industry, and yielded high praise from the exhibitors, which goes like that AWE really gives valuable and tangible support to participating brands. In addition, AWE also set up advertises board at Shanghai airport and high-speed railway station for every year. What we should noted is that these quality advertisements made by AWE and participating exhibitors create the best exposure opportunity for these enterprises.

Take the effect of “poster war” as an example, as one of the world’s three major home appliances & consumer electronics show gathering global business giants and top summits in the industry, AWE conduct “poster war” with its partners, especially, exhibitors every year in the early stage, which has already become a carnival for blue Vs at social platforms. 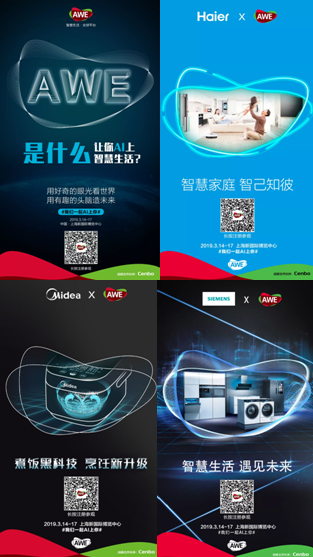 For instance, earlier this year, AWE initiated the poster campaign titled “ What turns you into a lover of AI+Smart Life”, under the theme of AWE 2019: AI·Smart Life, and many well-known appliance enterprises have taken part in the activity. Exhibitors like Haier, Midea, Bosch, Siemens, Hisense, Fotile, Robam, Skyworth, Huawei, Sharp, AUX, Gree, Vatti, Rinnai, Macro, Changhong, and Meiling attempt to popularize their brands and products through poster war, leading to the exposure of collective brands composed by AWE and partners with the effect of “1 + 1 > 2”. 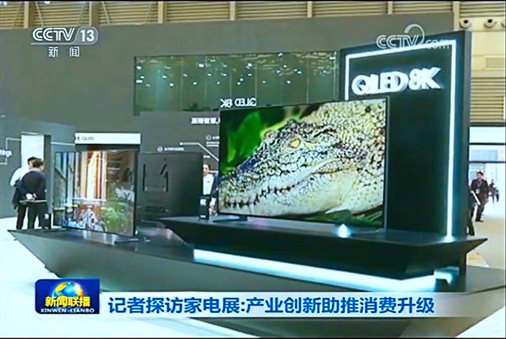 The influence of AWE is the reason why domestic and foreign media perform special reports. In March 2019 when AWE2019 was held, CCTV conducted more influential interviews than previous years, dramatically increasing the exposure of AWE. During the two sessions, CCTV broadcasted a depth report about AWE of more than 260 minutes. On March 16, 2019, under the theme of “ AWE: Industrial innovation to promote consumption upgrading”, CCTV News spared two minutes to cover the AWE 2019. On the next day, Consumer Advocate of CCTV2 also made a special report on the exhibition. In addition, in the nearly one-hour special report on AWE 2019 at In-depth Finance & Economics on CCTV2 on March 23, the intelligent and contextualized home life displayed by giants like Haier, Midea appeared in the program. During AWE2019, CCTV2’s Dialogue also moved the recording to the exhibition, inviting industry leaders to share their insights about business trends,  based on which they made a 52 minute-long special program titled “Brands builds better life—home appliance” that was broadcasted on March 24.

Media in Japan, South Korea, the United States and European countries also take the initiative to report on AWE every year. It is noteworthy that the Japanese TV station in Tokyo this March also sent a special team to report on AWE. Further, AWE also attaches great importance to the cooperation with various local media. Every year during AWE, local TV stations have related news reports, and in host city of Shanghai,  television advertising and radio advertising are common to see besides featured reports.

It is undeniable that many partners propose to establish cooperation with AWE after viewing various and comprehensive brand advertisements and witnessing the rapid rise of AWE and its powerful influence. Such being the case, why AWE organizers continue to pour large investment to do product advertising? 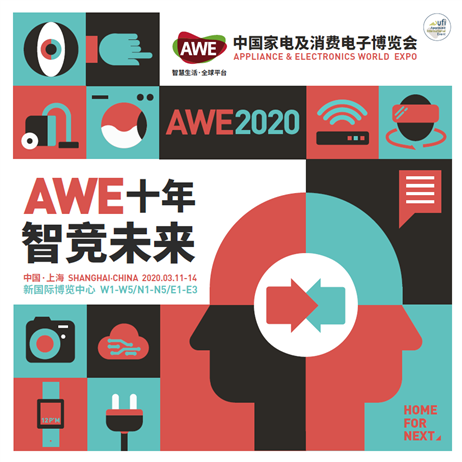 “In fact, we intend to do propaganda with those exhibitors”, the chief of the organization said so, “the growth of AWE has been inseparable from exhibitors and all kinds of cooperation partners, and the real development is about the win-win result for both AWE and our partners.” The chief added, AWE is expected to become the best business partners for enterprises ans it has been committed to improve their work to attract more audience by cooperating with advertisers to launch high-end quality ads and market participating brands.

According to the latest news, AWE 2020 which will kick off in March next year not only maintain its cooperation relationships established in this year, but also strive to expand marketing channels and resources. For example, it tends to cover more billboards in Shanghai communities with the support of Xinchao media and to work with users with billions of fans at Sina Weibo to further expand the popularity of AWE2020. Addtionally, the organizers will also strengthen cooperation with all kinds of trans-boundary media and unicorns in the relative industry to improve the penetration and influence of AWE2020. furthermore, AWE’s official platforms are also about to update interactive posters related to the theme of “Future of intelligence competition”, which presumably will trigger a poster war among AWE and these business giants.